From Boring to Dramatic

From Boring to Dramatic 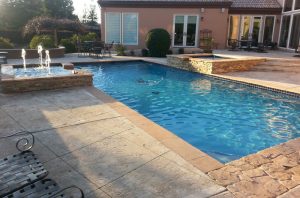 This customer had a pool that didn’t quite work for them visually. The sheer descent waterfall looked like and afterthought and the pool and spa were sort of plain. The backyard needed a more dramatic focal point and the current  was just not working for the purpose. There was also considerable road noise from behind the rear wall and we needed to find a way to minimize that.

The sheer descent waterfall was just too small for aesthetics and the minimal splashing was not enough to drown out traffic. We decided to focus the customers budget on impact items like the spa and converting the waterfall into an eye catching fountain. We removed selective decking and created a fountain and reworked the spa to match.  This included adding plumbing as well as re-working some of the existing. We trimmed the key features with natural stone and added some to the flagstones to the decking to complete the look. The pool was re-plastered and we added tile at the waterline and in the spa to accent the design.

The fountain with three heads not only served as a much more dramatic focal point but it also had enough splash to mitigate the road noise. The whole area looked more balanced with the sparkling pool new finish flanked by the matching spa and fountain. This remodel turned a basic pool to a dramatic showcase backyard.